Nurturing Nature
to feed ourselves 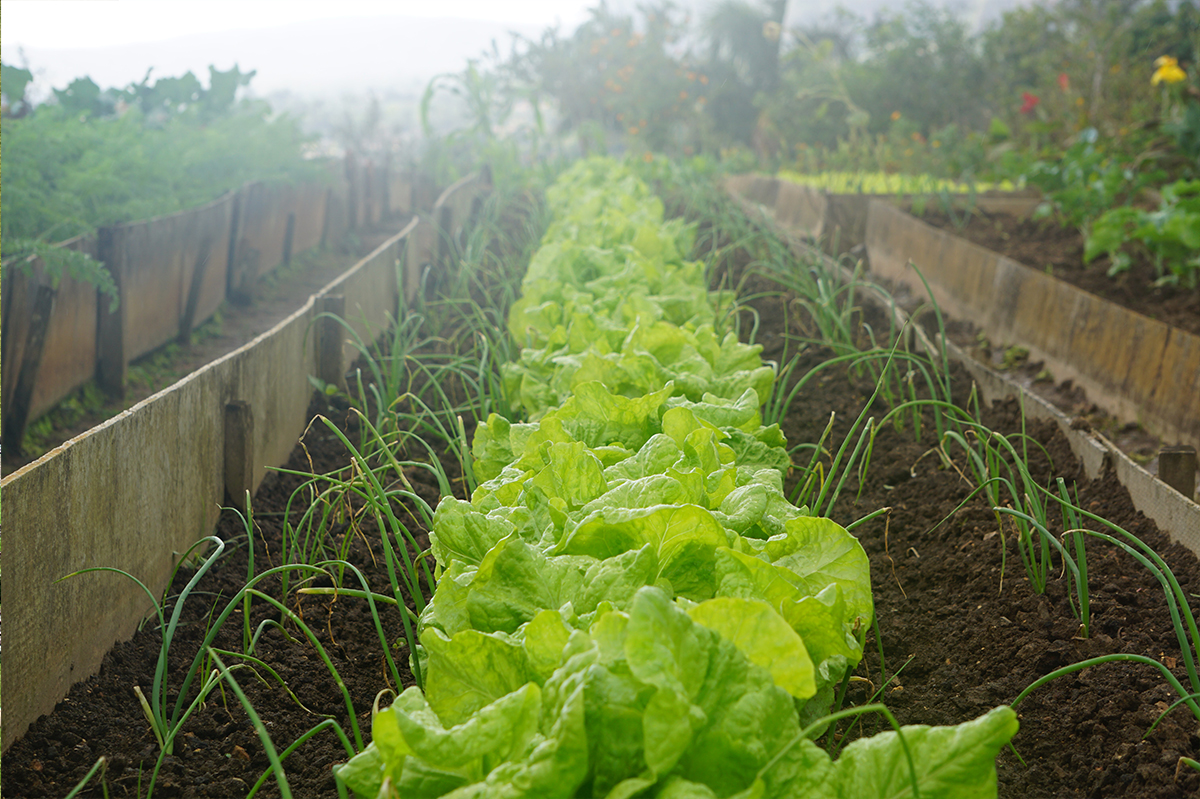 Nurturing Nature
to feed ourselves

There is a place where baskets are filled with colourfully packaged hyper-processed edible substrates, force fed vegetables and meat, and homogenous bread and cheese. It is mostly wrapped in plastic and from all round the world. The place is called a supermarket, and we call it food shopping. It has become normal, but maybe it’s abnormal?

A supermarket may fail to fill us with horror and despair, yet, as we step through the doors we appreciate our perception is dulled, as our shopping is reduced to speed, price and promotion. We have jumped and drifted out of inter-being and relationship with land into separateness, and fail to see the interconnectedness of everything which, while intellectually understood, is practically ignored.

Through mass ‘mis-education’ — where more formal, academic, technological and online approaches dominate; where informal, practical and traditional styles, and self-education is practically ignored; and a sense of place and locality is becoming the computer screen — only a few of us can feel the sacred nature of food, the land and soil upon which it is grown and the folk who grow it. The slavery and toxicity, the storage and transport and our screaming soil is hidden in a nice plastic-wrapped packet of organic blackberries from Mexico.

Organic food seems elitist, but with agroecology it can become the opposite. Trapped in a (masculine!) monoculture mindset where an inclusive holistic view is thrown out of the window and reduced to price alone, the social and environmental (internal and external) consequences of our current system are ignored. A globalised agriculture, farming and ‘food’ production system has smashed our connection with soil, local food provenance, production and preservation.

So let us imagine another place, where the UK declares that we will ‘grow our own’, in a deeply sustainable way. There will be trading between the regions, and the focus will be on growing food for people, not food that will enter the commodity markets, where effectively food is grown for trading within trading and for all the profiteers along complex and long supply chains. Agroecology means shorter identifiable supply chains.

The food providers, comprising small farmers and horticulturists, foresters and fishers, artisan bakeries and natural food processors, grocers and farmers markets, community cooks and chefs and cooking classes, will all have value way beyond money alone. They are respected. And they will be within reach, real and approachable and unable to get away with bad practice.

The essence of food sovereignty may be summarised to include the following six pillars.

1) In an inherently organic way food is grown for people first, and for the ‘market’ simultaneously and ‘secondarily’. This is complex as cities have to be fed too; however there are multiple studies and practice showing that this can be achieved.

2) The people who cultivate, grow, harvest and process food are valued; not coerced by dominant supermarkets and bulk buyers to compromise their environmental and community responsibilities nor eliminated by being forced off the land by remote and unaccountable corporations.

3) Food systems are more regional and national. A relatively few land owners, including investment banks, oligarchs and the landed gentry, own nearly half the land in the UK and receive massive subsidies not connected to production. In my region our local ‘landowner’ farms 2000 acres organically, but it’s tough. It is a lot easier to follow the subsidies, whack on the chemicals and fertilizers and make a ‘profit’. However, this year with waterlogged land and a ban on nicotinamides it can be tough all round. Farming is not mechanical: it is a dynamic art, and bioregional practices need to be passed down and learnt and adapted through generations, producing clean food through healthy soil and healthy, wise workers.

4) To take control locally, regionally, so that food can be shared and traded in socially and environmentally sustainable ways which conserve diversity. Diversity is resilience, flexibility and adaptability.

5) To pass on skills and knowledge with useful application, experimenting and rejecting too much top-down control which dilutes and eventually evaporates the wisdom of experience.

6) To be a part of nature, to work with nature, requiring production and distribution systems that protect natural resources and avoid energy-intensive industrial methods that damage the environment and all of us who inhabit it, whilst wasting incalculable amounts of precious water.

These pillars are easy to state but much more difficult to put into practice. Achieving such a system would require a political decision to shift subsidies away from large landowners and towards small mixed agro-ecological farms, as well as a period of transition. This is a systemic and holistic goal, albeit complex. I ask, how is it that, in the UK, we have a fabulous and thriving craft beer industry? The answer is both grassroots and political: in the 1990s the government reduced the amount of tax paid on the first 50,000 hectolitres of beer. Bingo. Suddenly small breweries sprang up like mushrooms after the rain! A similar approach could be taken for all land-based enterprises and workers.

We have an external threat of ubiquitous relatively cheap and very addictive junk food and an inner requirement for real and nourishing food.

There is a move towards ‘conservation agriculture’ amongst ‘conventional’ farmers, but it still fights for the use of chemical inputs! Transition will need to be funded, but as it is alarmingly necessary on so many levels, surely it will be worth it,

Most of the world’s food is grown using about a third of the agricultural land and resources, on plots of less than five hectares and mostly by women. Think about that!! This simple fact ridicules the story that we need Big Ag to feed the world; we are already feeding most of the world without it. The dominance of agribusiness over agriculture is fuelling starvation, obesity and ill health with equal veracity.

Agribusiness is about producers and consumers and jobs, agroecology is more about growing and eating and livelihoods. By polishing our perception and consciousness it is easy to see that all this is common sense. In the words of Altieri (2000) “Agroecology raises agricultural productivity in economically viable, environmentally benign and socially uplifting ways”.

Agroecology is an inclusive awareness and application of localised systems of horticulture and agriculture where each country and region is self-determining and self-responsible. The underlying principle is food sovereignty through agroecology and may for example encompass permaculture, organic, bio-dynamic, agroforestry methods and ways. It has deep accountability and integrity, provides livelihoods where farmers get a fair price and customers high quality, maintains the fabric of rural life and, through the sharing of resources and ideas, it builds cooperation and trust, has autonomy with less reliance on bought-in inputs and limits dependency on borrowed capital. It also allows nature to be herself, for she is doing the real work, and with awareness and union she will abundantly deliver for evermore.

There is ample data and evidence to demonstrate that agroecology can feed the world.

We need to move from uniformity to diversity. The corporations that control agribusiness also actively promote the idea that we need more of the same in order to feed the world. This is simply not true: diversified agroecological systems have huge potential to improve on the outcomes of industrial agriculture.

Essentially, the outcomes of specialized industrial agriculture and diversified agroecological farming are quite different.

We can choose a degenerative style that encourages monoculture and concentrated animal production, along with genetic uniformity, segregation of product chains (i.e. animal feed production and animal rearing in separate farms and regions), that is highly mechanised with massive amounts of external inputs and most of all is polluting the land, the sea, the rivers, the lakes, the skies and robbing the soil of its goodness. Or a regenerative style which encourages diversification of crops and locally adapted varieties/breeds, open pollinated seed that can be saved and used year after year, a natural integrated sustainable production, more labour intensity and low inputs and with the maximisation of multiple outlets.

The vision of food sovereignty and agroecology is a food system where all people – rich and poor, urban and rural – have access to healthy, regionally produced, affordable food from farmers they can respect and trust. The backbone of which is a vibrant mix of independent small/medium farms, cohabiting with our landscapes and communities to produce the food we need.

There are four principal outcomes

Agroecology promotes diversity and local adaptation, food is mostly for local consumption. This is in contrast with current industrialized systems that promote monoculture supported by excessive amounts of water and chemical inputs and produce food for a global market which is in effect a traded commodity first and foremost – however the trade is amongst a small group of six or seven corporations who support each other – and produce apparently cheap food (environmental, socio-economic and nutrition and health issues are ignored in calculations of efficiency.)

Simply put agroecology nurtures the soil and community and is essentially sustainable for ever.

This is more complex but essentially we can see in the UK that where agroecology is in place wealth is spread more evenly and communities are brought together, resplendent in a more independent way of living which has a great resilience and flexibility in times of hardship and climate challenges.

All Party Parliamentary Group on Agroecology

iPES – from uniformity to diversity – note the key messages on page 2.

The Land Workers Alliance these people are so special: they are all growers as well as political activists.

The Ten Elements of Agroecology

Seed Cooperative The people I grow seed for, an informative website check the menu.

Eves Hill VegCo The people I volunteered with who provided training in organic horticulture, massive respect.

Check out this Paris-based think tank with a report out on 7th Jan 2021 – Ten Years to Agroecology here  referenced from the online magazine from Riverford Organics.

Even the UN supports agroecology to feed the world:
The Ecologist
Grain.org

If you like you can be agroecological in a vegan way as is Eves Hill VegCo.  Bill Tara makes the case in his book How to Eat and Save the Planet.

A farmer’s viewpoint on agroecology is distilled beautifully in this excerpt of The Shepherd’s Life by James Rebanks (2016) on BBC Sounds. Listen here